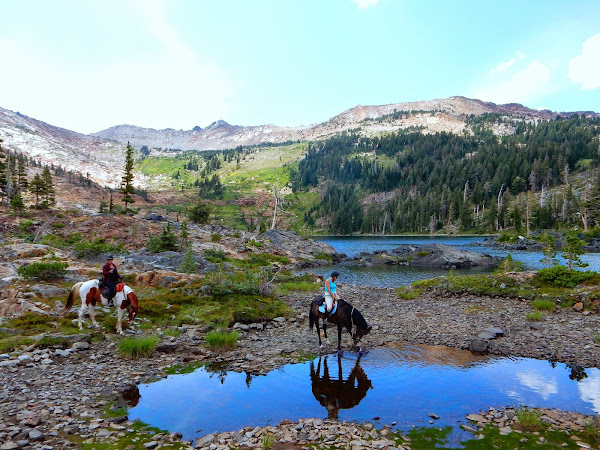 Difficulty: Strenuous.  Difficult to follow trail.  Undermelt hazards.  Numerous creek crossings of varying difficulty.  Could be more fun as an overnighter.  Fires are allowed during winter.
Length:  Ours was a 9.3 mile loop.
Directions and details:  Take I-80 to the Boreal exit west of Donner and east of Kingvale.  South of the exit make a left.  Stop at the hotel for a parking permit.  Your regular state park pass does not apply. The hotel has some vending machines with snacks. It is snowplowed in the event of snowy weather and has a nice restroom with vault toilets.  The kids can build snowmen and tabogan there.  Great places for snowball fights, too!  During the regular hiking season, there is an interpretive loop trail.

This was my second time out snowshoeing in my new MSRs made for virtually every condition.   You may remember that we each broke one of our trekking poles on our last trip so I had one of each set this time.  I ordered the new ones but they hadn't arrived so "Make do" as grandma used to say.  This time the sun was on our side rather than stormy weather, and I had mapped out a plan for a longer trail.  It seemed like a reasonable day's hike at 1 mile an hour average, expecting about 7+ miles and time for a meal. We used the sno park paid parking last week so we knew the ropes and were able to waste less time and get out on the trail.  (Pay at the hotel as you enter the parking area.  There are vending machines there, too.) Near the trailhead that is down the road in the loop is a vault toilet. Use the trailhead at the billboard sign turning north instead of south at the junction.  I was excited because our last trip was so much fun despite bad bad weather; this day promised to be stellar!
The snow was sparkling, the weather was crisp but not bone chilling.  The snow was icy but I thought with sun it would soften up through the day.  (Guess again).
﻿ 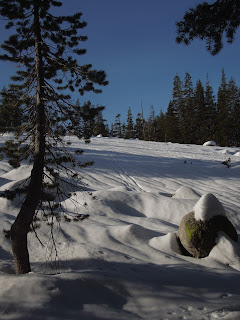 These photos are for fun and to show you to see what the trail was like: 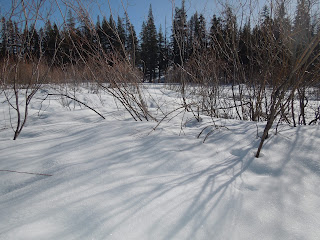 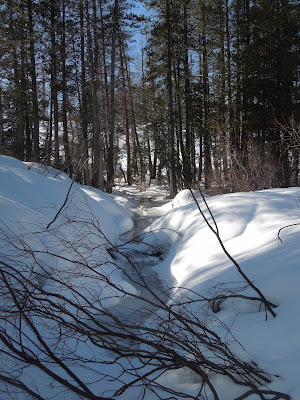 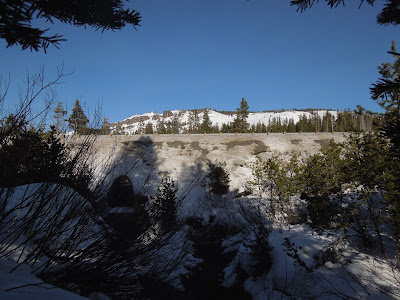 Unlike the perfect dry powder we had last time, more effort was required to walk on this crunchy  snow and I found myself tempted to take the snowshoes off and just hike in my snow boots.  There were bootprints to follow and not much sinking, and I've done it before!  From the trailhead we made our way easily to the tunnel snown above that goes north under I-80 for the PCT. 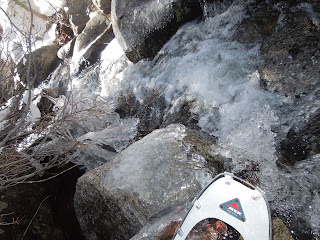 Once we crossed the highway it took some effort to stay on the trail because no one had been on it this far back  The sports store said lots of people were here yesterday so we expected broken trail all the way.

﻿
I like those, but in the deep, crusty, unbroken snow there may or may not be a faint look of a trail buried. At the creeks we faced steep banks of one to three feet, the water (sometimes a foot deep) and the other bank would be as much or more of a drop off.

After several miles of detouring, it seemed like the GPS predicted the same distance to our destination which was confusing because it continued showing our tracks as progressing right along. 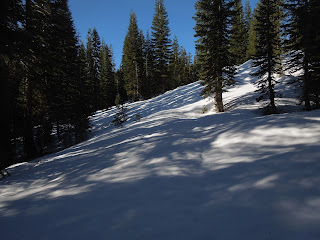 In so much shade we had to stop and get me some layers, but we were dry and still happily challenged.  No conversation was possible unless we stopped because the crunching of the snow under our snowshoes was so loud we couldn't hear each other!  No kidding!

Finally we reached an intersection of trail junctions and had to choose that all go northerly, just more east to more west.  None was the obviously correct route and GPS wasn't a help at this time. Upward to the most northeastern direction was our choice. My quads, calves and even the tops of my feet were so achy, my usual penchant for going uphill had vanished.  I just wanted to stop and heat water and eat.

At the top we were on a wide open ridge with breathtaking views all the way around!  We were buffeted by extreme winds that actually took me and another hiker completely off of our feet, in snowshoes, and threw us to the ground - me twice!  First time in my life! 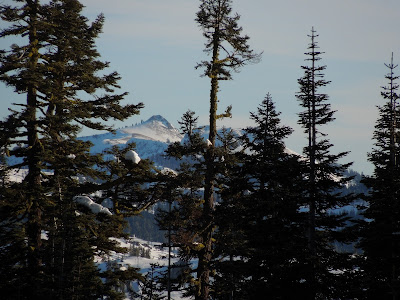 The GPS showed us on another ridge to the north!  It wouldn't move either so clearly it had lost function.  Now getting later in the day, and being tired, we knew we faced a headlamp snowshoe back to the parking in possibly more unbroken and invisible trail. 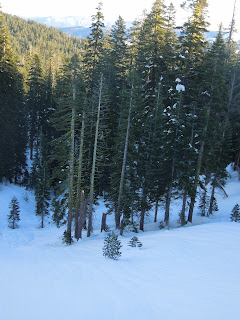 Achy and sore, but invigorated by the fantastic views, we headed downhill to the west southwest.  It was like a freeway.  Snowshoers, a snowmobile, cross country skiers, and hikers had made it so much easier by packing the snow and making the trail clear, plus it was all downhill.  How often do you hear me being glad about going downhill, but I was rapturous! 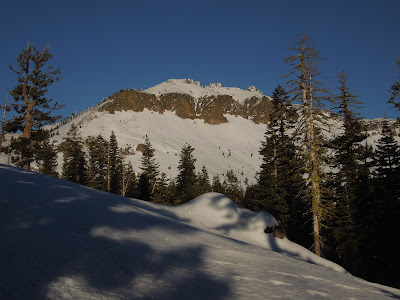 Our whole hike totaled 9+ miles (we expected 7) and we did end up using headlamps, but only at the end and not a concern.

Advisory:
The PCT wound through the woods and if you are experienced at finding your way in snow without anything but a map and compass, this route was untouched and had everything the backcountry offers. 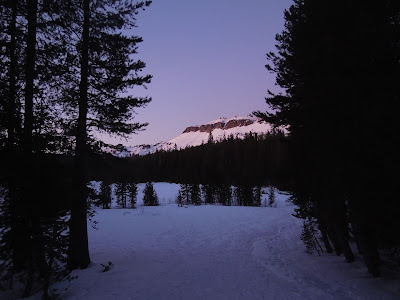 We had fun crossing creeks and identifying animal prints in the snow. If it were powder I would have been more thrilled!  At the end of the day I had sore muscles and an enormous sense of accomplishment.  Honestly I am not as sore from this hike as the last snow trek.  Our photos are prettier without the stormy grey images we got last time, too.  The views made it tempting to stay on Castle Pass for sunset and if I were familiar with the trail back, I would have.  The GPS failed twice on the trip so I posted our tracks but suggest searching for additional tracks to Castle Pass, PCT, and Peter Grubb Hut. Our map is shown below.  I drew in the places the GPS didn't record.  A handful of people have GPS tracks posted of hikes in this area, but be aware that in the snow, the trail is virtually undetectable in many places. 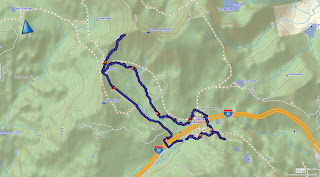 HAPPY TRAILS and as usual, remember to take plenty of water, snacks and food, layers for warmth and a first aid / safety kit.  I always say take a light source and way to start a fire.


If you appreciate our state parks (and sno parks), consider this letter I received and join in!  With membership you get a parking pass and other amenities, plus help keep our parks all open.
Dear Reader,

Throughout 2012, our parks faced budget cuts, development threats and more. And next year's budget battle will be challenging.
The good news is you can double your impact with your tax-deductible gift today, which will be matched dollar-for-dollar!
That means your contribution of $75 or even $150 to California State Parks Foundation will go twice as far. But time is quickly running out – as this match only lasts until midnight on December 31st!
Your support has never been more important! We nearly lost 70 of our state parks this year. But it would have been a lot worse without supporters like you.
Stand with us and stand for parks today by making your tax-deductible, year-end contribution to the California State Parks Foundation.
Don’t lose any time! There are just a few weeks left for your support to do twice as much for our state parks! So please, double your gift – and your impact – before the clock runs out at midnight on December 31st.
Thank you again for your continued support this year and in the year to come.

Thank you for your visit to Peachy Hiker's place and for taking the time to share your thoughts!